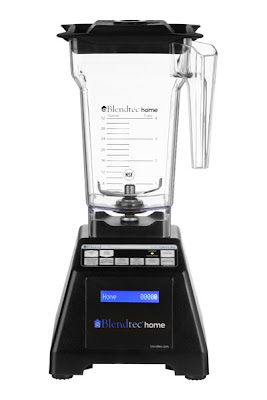 Last week, we got a new blender - a Blendtec Total Blender. Since Yvette started her weight loss program, we've gone through 4 blenders or so. Making multiple shakes every morning wears out your typical bargain basement blender in 6 months or less. We're hoping that the new blender lasts us a whole lot longer. It had better last a long time, it was nearly 10 times as expensive as the last blender we bought.

The Total Blender is based on Blendtec's commercial blenders (my local Starbucks uses Blendtec blenders). It's got a 1500 watt motor, as compared to the 300-600 watt motors in a typical home blender. It's got a very solid square blender jar, and a scary-looking set of ultra-sharp blades. Instead of a set of speed buttons that are labeled with wacky labels like "frappe" and "fold", it's got buttons naming what food you're making - "milkshake", "soup", "smoothie". Each button initiates an automatic program which speeds up or slows down as necessary to perfectly mix whatever you're making. It even stops automatically at the end of the program. Nifty!

So how well does it work? It's incredibly powerful - it crushes ice without even slowing down. It's also very loud at full speed. The instructions that came with the blender were minimal, but it did come with a pretty big cookbook. Apparently, the motor is strong enough to actually grind flour, make peanut butter from whole nuts, etc. On the "soup" setting, the friction of the blending actually makes the soup hot! For simple stuff, like the aforementioned diet shakes, it does the job about twice as fast as our old blender. The jar is super easy to clean, and doesn't seem like it'll get food stuck under the blades like our old blender tended to.

There is one downside that I've identified so far. Have you ever had a blender accident, where an overloaded blender popped the top off and splashed stuff everywhere? Try to imagine what it looks like when that happens with a blender that's 4 times as powerful. This is particularly problematic with hot liquids - the fast start of the blender throws the hot liquid up in the jar, which causes the air in the jar to expand and jet out the top. I think of it as Mount Blendtec erupting. Cleaning shake mix off the ceiling isn't very much fun.

I think I've got the technique dialed in now. I do wish they'd implement a slightly softer start for the low-speed settings, though. All in all, it's definitely a massive improvement over our old, tired blender. I'm going to try some of the recipes from the cookbook. That should help familiarize me with the various cycles. Besides, it's just plain fun to use - it'll blend darn near anything. Speaking of which, if you haven't seen it, check out Blendtec's Will It Blend? for amusing demos of the blender in action.
Posted by Mark Bessey at 9:22 PM 2 comments:

They're running a contest over at Worse Than Failure

Worse Than Failure (formerly The Daily WTF) is having a programming contest, with either a MacBook Pro or Sony VAIO laptop as first prize.

For those not familiar with the site, their theme is Curious Perversions in Information Technology. People submit particularly awful pieces of code, or database schemas, or business practices, and the readers of the site make various insightful, witty, outraged, or just plain misguided, comments on them.

The contest: Implement a four-function calculator program (for Windows, or UNIX/GTK). Your program must pass the specified test cases, have a GUI driveable using a mouse, and should cause people who read the code to shake their heads sadly in disgust.

There's much more detail on the contest website, but I thought the idea of the contest was interesting enough to mention. The contest discussion forum is hilarious, as well. Check out this comment:

Mine's too slow right now. It's taking about 45 minutes to add 9876 and 1234, when I was hoping for about three seconds. I knew it was O(n^2), but I was expecting the constant to be a bit smaller. I may need to replace the Mersenne twister with a faster random-number generator.

I have what I think is a pretty good set of ideas for a submission, I'm just not sure that I'll be able to finish in the time remaining (12 days left). I'll probably submit whatever I have by then, even though I almost certainly won't win. I'm looking forward to seeing the other entries, though.
Posted by Mark Bessey at 12:04 PM 1 comment: 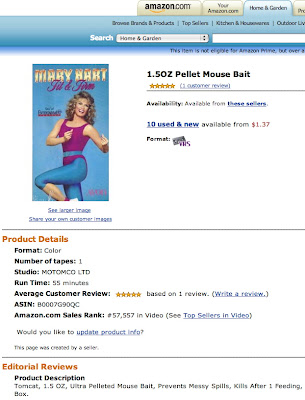 Looks like somebody at Amazon.com accidentally merged two entries in the product database.
Posted by Mark Bessey at 9:05 AM 1 comment: