Most surpising headline of the year

Unfortunately this turns out to be bad reporting...
Posted by Mark Bessey at 4:27 PM No comments:

Is it my imagination? 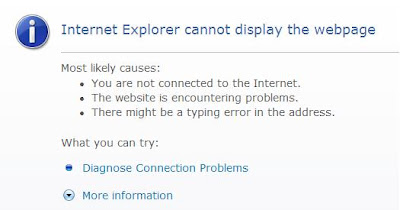 Am I mis-remembering, or did Internet Explorer formerly produce more helpful error messages than this one when failing to connect to a website? Is this another IE7 "feature"? Why would you display the exact same error message for no network connectivity, a DNS failure, and a site that doesn't respond?

Given that it's trivially easy to distinguish each of these three from the other cases, why not at least tell me which is actually the problem?

As I mentioned previously, I've been working with Lua recently. I'm really enjoying it. I'd place Lua somewhere slightly to the right of Tcl on my Programming Language Complexity Chart, which probably explains why I found it so immediately appealing.

There are many kinds of simplicity. I think that one of Lua's strong points is that it tries to get the most possible mileage out of each language feature. For example: Lua is dynamically typed, meaning that values have a type, but any variable can hold a value of any type. Lua defines the following value types:

For purposes of this discussion, we're going to ignore the userdata type, since that's mostly used when dealing with opaque data from the "host" program (Lua being designed to be used as an embeddable interpreter).

Now, this is obviously more types than some other scripting languages, but it's still a fairly short list. Most of the types are fairly self-explanatory - number represents a numeric value, strings are used for text, booleans are used for true and false, nil is the value of an uninitialized variable, and function represents a function.

Tables are an interesting case. Tables are Lua's implementation of the Associative Array, everybody's (or at least my) favorite universal data structure. Once you've got a data structure that can index arbitrary values with arbitrary keys, you can use it for all sorts of things - and Lua does. As the book Programming in Lua puts it:

Tables are used to implement records, arrays, Object-Oriented Programming features, namespaces (the package system), and a variety of other features. Even global variables are implemented as entries in a table.

One extremely powerful feature of Lua is metatables, which are tables that affect the behavior of other tables. Every table can have a metatable attached to it, which controls the behavior of the table when certain operations are perfomed on it. This is conceptually similar to operator overloading in C++, but again just implemented as a series of entries in a table.

People have implemented both class-based and prototype-based OOP systems for Lua using just a few relatively simple functions that manipulate tables and metatables. That's a pretty good example of the power that's available.

Posted by Mark Bessey at 9:25 AM No comments:

Leaning towards the left...

This diagram is an adaptation of something I wrote on a co-worker's cube wall. I based this on my own experiences, so it probably reflects my prejudices, especially with regard to the placement of the "Human Limit" marker. It'd be interesting to come up with some kind of objective measure for the complexity of a programming language. Maybe multiply the number of reserved words by the number of operators, or something.

I think that excessive simplicity is one issue that limits adoption of the languages to the left of the diagram. Though I've never heard someone come out and say it, I think a lot of programmers are actually put off by syntax that's too simple. People complain about "all those parantheses" in Lisp, but what really bugs them is that the parentheses are really all there is to Lisp, the language.

I tend to prefer languages with simple syntax. I find that a simple set of rules to remember helps me to focus on what I'm trying to accomplish, rather than how to harness the myriad of tools available to me to actually do the work. I also find that simple languages are paradoxically more flexible. In a language like Lisp or Tcl, it's easy (and more or less encouraged) to extend the language with your own constructs, which are "first class citizens" as far as the language is concerned.

Having said all that, even I have my limits. While Smalltalk is a wonderful system for puttering around with, I don't love it. I think the lack of a more-sophisticated syntax for algebraic expression really hampers the usability of the language.

I'll add some additional commentary tomorrow, especially with regards to where Lua (the most recent language I've learnt) fits on the diagram, and what that implies about Lua...
Posted by Mark Bessey at 10:20 PM 1 comment: