The Problem with Magic...

The problem with software that works as if "by magic" is that when it's broken, you're practically helpless. I just ran into my first instance of that with the iPhone SDK. I can't go into specifics here because of the NDA, but I just spent a really annoying couple of hours trying to resolve a problem where a better-worded error message would have immediately revealed the actual issue.

Hint to API implementers. Saying: "I loaded your file, but **** isn't set correctly" is not at all the same thing as "I tried to load your file, but I couldn't find it, and therefore **** couldn't be set up". Finding a typo in a textfield in Interface Builder by starting from scratch and re-building the whole interface kind of eats into the productivity advantage of using IB in the first place.

Oh, well. At least I didn't have to burn one of my tech support incidents to have someone point out a typo for me. That would have been really infuriating.
Posted by Mark Bessey at 11:23 PM No comments: 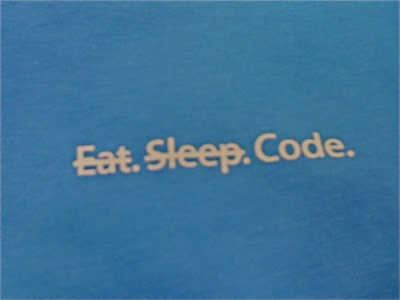 Five days, 21 sessions (not including the keynote), and 12 rides on Caltrain up to San Francisco and back. My head is spinning, but my first two iPhone applications are installing and running.

I think I'm ready to go back to work and take it easy for a while. Unfortunately, I think my boss has other ideas...
Posted by Mark Bessey at 1:18 PM 1 comment: I'm really excited to be going to WWDC this year, for the first time as an attendee. WWDC is Apple's Worldwide Developer Conference, which is 5 solid days of technical education and on all things related to Mac and iPhone development.

The only other times I've gone to WWDC, it was as an Apple employee, and I spent my time there helping customers with their issues. Not that that wasn't fun - it was probably the most enjoyable part of my time at Apple. But I am looking forward to sponging up mass quantities of information, and asking my former co-workers stupid questions :-)

I know a lot of the Mac enthusiast and rumor-tracking sites are wildly speculating on what new Apple products might or might not be announced at WWDC. I'm only vaguely interested in any possible hardware announcements. I think the most important announcement form Apple in the last 10 years was the introduction of the iPhone - not because the hardware was so special, but because they built it on OS X, and released an SDK relatively soon thereafter.

Hardware is interesting, but it tends to follow a fairly predictable pattern. This year's Macs will be some combination of faster, lighter, and thinner, and there will inevitably be iPhones with more storage, faster network connectivity, and more features.

More interesting to me is that Apple has really started to embrace having a single platform that supports multiple kinds of products. I wrote a whole blog post on that subject a while back, but the fact that Apple can now get a microprocessor for $10 or so that'll run OS X means that they can aggressively move into whatever new kinds of products they want, based on variations of the new iPhone platform. It's an exciting time to be a developer for Apple's platform.

For those of you who'll also be there, keep an eye out for me - I'll be haunting the iPhone sessions, and working furiously to finish up a couple of projects I've been working on, now that I can actually test and debug them on iPhone hardware (my developer certificate arrived just in time for WWDC).
Posted by Mark Bessey at 10:50 AM 1 comment: